What does it take?

What does it take to be successful today?

It seems that there is a lot of thought and talk and energy spent looking for the shortcut, the way around, the better way. And I don’t blame anybody for wanting to do that.

I think Michael Cain the actor said it correctly, “If you really want to become an actor but only providing that acting doesn’t interfere with your golf game, your political ambitions and your sex life you don’t really want to become an actor. Not only is acting more then a part-time job it is more then a full-time job. It is a full-time obsession.” 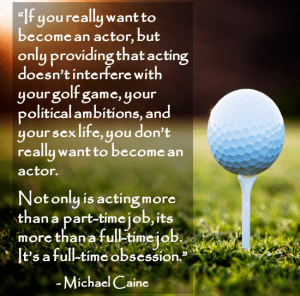 Now I think that’s true of being in business. Now I meet people all the time that say “John I want to be like _______” and they name somebody because that person has it all figured out and they are probably a great role model and all of that. But what’s left out constantly is that person did all of the things necessary to get to where they are so they can then see things with a bigger picture, hire people and all of that.

Let me clear up what I think is kind of this fantasy world which people who say I want to work 4 hours a week or 1 hour a day. I mean that’s fine. I think that’s possible. But understand that every person I’ve met who has accomplished some level of that freedom has people who work for them, and the people who work for them are not working 1 hour or 4 hours or whatever it is. Those people are all doing one thing; they’re working their ass off making sure they get everything done that needs to get done.

Never kid yourself, in the end it degrades to work. Drucker was right, we all have to go out there and push it forward.

Now back to this whole part-time, full-time obsession thing, if you really want to be excellent, I mean beyond good you have to become obsessive in my opinion. You have to really dive in because if you don’t than someday you will wake up and whine and moan and say, “Whoa is me. I deserve some other lot in life. I deserve something else.” What you’re going to do is get off your ass and keep pushing things forward.

There are no rules in a knife fight. In some ways in business there are rules but it’s not like you can just cookie cutter and say all I have to do is this. If you want to be really, really good everyday you have to say how do I get a little bit better.

Every person I’ve ever met, unless they were exceedingly lucky (but then they always piss away the money anyway), is I’ve met people who are really beyond belief obsessive about becoming the best that they possibly can. Do that and success is not something that is an illusion. Do that and it’s not some series of gees I’ve got one foot out the door all the time but it’s planted firmly in the belief that I’m going to get up everyday and work as hard as I possibly have to not because it’s something that I need to do because it’s something that I must do.

That I believe is the lesson of that quote and why it’s so important if you really are going to be mega successful that you have to live with this constant sense that you have to be obsessed at becoming the best that you possibly can be.

What does it take to be successful today? It seems that there is a lot of thought and talk and energ...

From the first time that I experienced the internet I had a sense that it would over time radically...